The Alhambra Palace – Secrets behing the Writing on the Wall 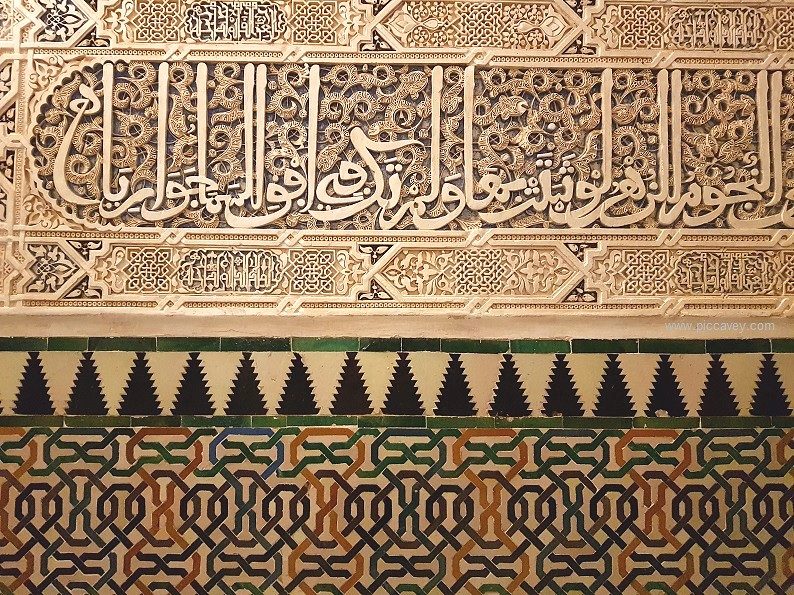 The Alhambra Palace is the only medieval palace in the world which has arrived intact to the present day.

After visiting many times, one of the things which fascinates me are the intricate details on the walls. As you step into the Nasrid Palaces it is like walking into an elaborate poetry book. Covered in beautiful words and phrases.

I wonder what is the meaning of all of these inscriptions?

Another thing that these walls offer are clues into the functionality of different spaces around the monument.

Even more inscriptions cover phrases such as “There is no victor but Allah” which appears many times. Also recurring words like “happiness” or “blessing” appear often throughout the palace. These words are there to protect the monarch honoured in each courtyard.

Similarly other phrases appear such as: “Rejoice in good fortune, because Allah helps you” or “Be sparse in words and you will go in peace.”

It seems like the men choosing these texts for the palace walls were poets but also politicians. This wall decoration was an elaborate form of political propoganda. These palace officials reflected the authority and power of the Sultan.  Visible to anyone entering the rooms at the heart of the Al Andalus kingdom.

As you wander along the maze like corridors of the palace, you will see many walls covered in brightly coloured ceramic tiles. The tiles cover half of the walls. of this increible interior we can appreciate this is a key element in Islamic art.  As this historic period is of great importance, we can still see coloured tiles across Andalusia today.

Futhermore these tiles apart from being decorative, keep walls cooler in summertime and protect them too. Tiling done with mathematical precision was intended to be aestetically pleasing. Geometrical calculations were used in the tile patterns.

Creating an infinite design to cover as much distance as needed for each space. 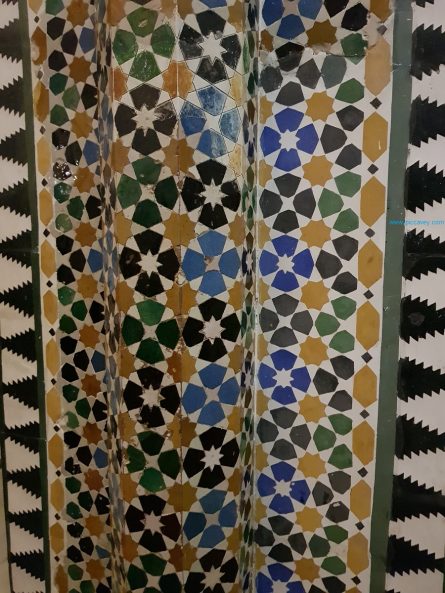 All those centuries ago the colours of the tiles were created with these materials:

Above the tiles, higher up towards the walls geometrical shapes or poetic inscriptions abound. Towards the top of the walls quotations from the Koran appear, intentionally situated far from the ground.

Water and geometry are the main design elements in the Alhambra. Islamic culture does not accept the depiction of human images. Because of this the Alhambra walls have calligraphy, plant motifs and geometric patterns.

The façade of the Cuarto Dorado has impressive decoration. The walls are golden in a delicate filigree pattern. The detailed shapes are floral and geometric forms. Due to this extensive detail and the geometry of the Alhambra even mathematicians have analysed the Alhambra.

They see the Golden Ratio in parts of the Alhambra´s design.

Despite the ornate appearance of these walls, it doesn´t appear to be a main entrance.

This leads to the throne room and into heart of the palace itself.

Although the inscriptions above the door give us a clue.

One of them tells us  ¨at which the paths split¨

Futhermore the throne verse of the Koran is there too;

¨His Throne doth extend over the heavens and the earth,

and He feeleth no fatigue in guarding and preserving them

for He is the Most High, the Supreme (in glory).¨

The design of this throne room is based of many square shapes. Consequently Mathematicians and architects appreciate this room due to it´s symmetry and precision. Also known as the Hall of the Ambassadors would have looked quite different that how we see it today. Because  the room would have had brightly coloured rugs, beautiful vases and musical instruments around.

Silks inside the Alhambra

Also in the Alhambra silk was used extensively. They used only the best quality materials for covering walls, cushions and curtains. The silks would have been sumptuous colours and with intricate patterned designs. This decorative element is one which we can no longer appreciate today.

Certainly as this was the throne room, inscriptions here are more abundant:

¨From me you are welcomed morning and evening

by the tongues of blessing, prosperity, happiness and friendship¨


¨has decorated me with the robes of his glory and excellence

without disguise and has made me the throne of his empire

The intricate cedar wood ceiling has exacting measurements. Extremely difficult to put into place it consists of 8017 multicoloured panels. Symbolizing the seven heavens of Islamic Paradise. Diagonal lines radiate from the centre representing the four trees of life.

The ceiling is decorated with lots of stars. Painted to shine like ivory, mother of pearl and silver. Also worth noticing is the difference between the 8 pointed and 16 pointed stars.

Most of the room would have been in a dim light, ensuring cooler temperatures. the latticework on the windows allows filtered light into the room. The effect of the light from the windows shone around the throne.

This would surround the sultan in diffused light in a dim room creating a position of power and mystery.

The throne used to be raised up slightly to give it height. 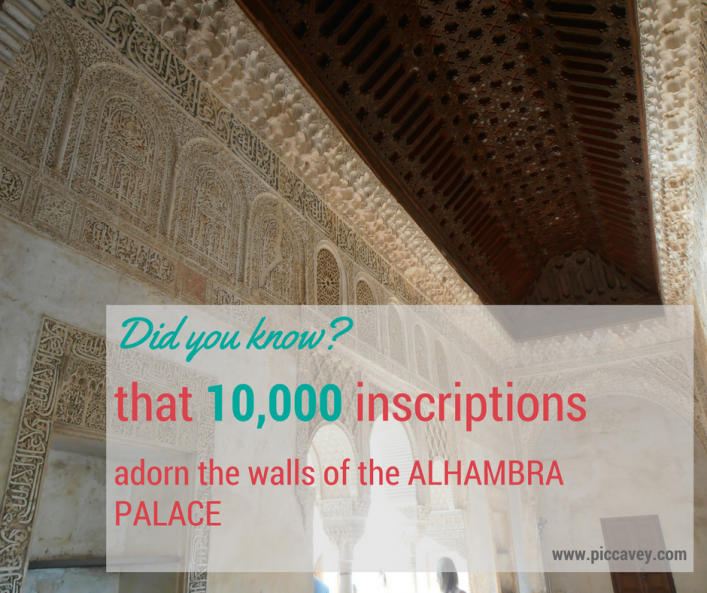 The Hall of the Two Sisters

Another way to decorate a room was to write poems specifically for the space. Probably by the court poet Ibn Zamrak,  (1333-1393). The hall of the two sisters is one of those, it´s verse wrapped around the impressive walls.

This room off the Courtyard of the Lions has two huge marble flagstones on the floor. They have the same dimensions on either side of the entrance. This white stone is from the town of Macael in Almeria. I´m sure that it was quite an ordeal moving these huge flagstones almost 200 kilometers in those days.

The ceiling in this room is breathtaking. Inside the white plasterwork creates a dramatic effect. These shapes are muqarnas . The Alhambra is the best example of Islam architecture in Europe.

Seems like it took many months and years of work to decorate the palace interiors.

The poem mentions this impressive architecture;

The portico is so beautiful that the palace
competes in beauty with the sky.
You dressed it with such an exquisite lamé,
that the loom of the Yemen is forgotten.
¡How many arches are high on its summit,
on the columns that are adorned by the light,
like spheres that turn
above the glowing pillar of the dawn!
The columns are so beautiful in every way,
that their success flies from mouth to ear:
the marble throws its clear light, which invades
the black corner that blackens the shadow;
its highlights iridesce, and one would say that
they are, in spite of their size, pearls.

(This space is not usually open for public visit) I wanted to include this room as its a complete contrast to the other walls in the Alhambra.

Built in 1537 for the Queen Isabel after the conquest of the Alhambra Granada. Originally this was the Tower of Abu I Hayyay. This room is set high up in the tower and has spectacular views over the river and the Albayzin.  This open balcony, opposite the Carrera del Darro, was a favourite spot for the Catholic Queen. She enjoyed hearing the voices of the people in the town below. Beacause they would be speaking arabic….

The wall painting are Italian style with rich colours. The frescos by Julio Aquiles and Alexander Mayner are of historical interest. They depict the expedition of Charles V to Tunisia in 1535. Scenes show the army´s departure from the port of Gagiliari, their withdrawal and their return to Sicily.

Other paintings include flowers, animals, angels and other decorative motifs. All set on a white or red background. The space is full of wall paintings and no area is undecorated.

Unfortunately the Catholic Queen never got to enjoy this space as we see it today as these frescos were painted between 1539-1546, Queen Isabel died in 1504.

Seems like there are infinite an of inscriptions in the Alhambra. So this is just a small compilation to give an idea of the detail along the palace walls.

You really need to see this in person to appreciate how many there are.

Probably the other posts in this series>  Secrets of the Alhambra:Water

or the Dying Art of Taracea in Granada – Legacy of Al Andalus maybe of interest.

The Secrets of Granada Alhambra Palace