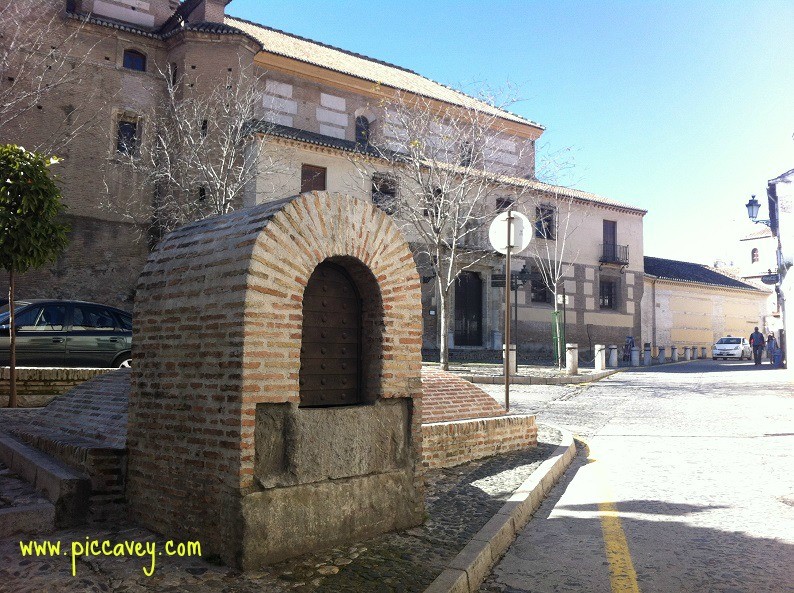 Aljibes is the plural word. Meaning underground wells. An aljibe is a water deposit tank or cistern. In Granada many of these historic structures can be seen dotted around the Albaicin quarter. The largest one in the city is the Aljibe del Rey which holds over 79,251 US gallons or 300 cubic metres of water.

At the Aljibe del Rey, Fundacion de Agua is a Centre about the water supply and history of Granada.

Ocasionally they offer guided tours of the Aljibes of the Albaicin and other related activities. (in Spanish)

An interesting route to see some of the lesser known streets in the Albaicin is the Route of the Aljibes. As there are 25 aljibes to see even today, I have shortened the itinerary so that it can be done in a summarised way.

This list has the most important examples of aljibes and creates a circular route.

You also get chance to take in the view from the Mirador de San Nicolas too.

Remember to stop off for the odd tapa here and there. In the Albaicin there is always somewhere nearby to have a quick drink.

My shortened itinerary begins at the foot of Cuesta del Chapiz. The loop ends at Plaza Nueva (End of Calle San José Alta)

I included eight different Aljibes along the way.

Starting off at this point, halfway up the hill, Cuesta del Chapiz. This Aljibe has a capacity of 22 cubic metres and dates to the 14th century. Its appearance has changed. It is quite different than the original exterior it would have had historically. This water deposit was located next to the mosque of Yami´al-Ahdab.

The next Aljibe is just a short walk away. At the top of the Cuesta del Chapíz, this aljibe has a capacity of 19 cubic metres.

Walk along from the Plaza del Salvador towards the Mirador de San Nicolas, you will come to the Aljibe of Bibalbonud. This aljibe from the Nasrid period has a capacity of 21 cubic metres: It was built between 8th and 10th century. This water is clean and fit for drinking.

As you walk along and head to the right you will come across the Aljibe de las Tomasas. This Aljibe is one of the largest left in the city. This Aljibe has a capacity of 154 cubic metres. The tank itself goes underneath part of the Mirador de San Nicolas.

This round shaped aljibe has a different form than the other aljibes in the Albaicin, It recreates Roman arquitecture. It has a capacity of 15 cubic metres. On this street you can try Aben Humeya to stop off for a drink or lunch (views across to the Alhambra)

From the mid 14th century this is a great example of  Nasrid hydraulics craftmanship. It is located underneath a garden of a carmen (house). Only the very front of the Aljibe del Trillo can be seen. It has capacity for 50 cubic metres of water. Just below the steps of the Aljibe is the Restaurante Casa el Agua.

Turn left at the aljibe del Trillo and then walk up Cuesta Granados.

Walk along past the shop, on the left walk up the slope and steps to the Mirador de San Nicolas

Stop off to take a photo or enjoy the view.

This large structure just across from the Mirador de San Nicolas be has a capacity of 62 cubic metres. It was used to save water to supply other aljibes when necessary. This would have been located next to the old Mosque (now Church of San Nicolas) all those years ago. Stop off for a drink at Kike San Nicolas (behind the Aljibe in the square)

Walking from the Mirador de San Nicolas along the Calle Santa Isabel la Real you can reach the Aljibe del Rey. This is the largest aljibe in Granada, it´s capacity holds more than 300 cubic metres. This was built in the 11th century at the time of the Rey Badis and would have served the Ziri Dynasty too. This is the oldest aljibe as well as the biggest one. It is also known as Aljibe Viejo or Al-Qadim.

Walk along Calle Santa Isabel la Real, then down the calle Oidores to get to the Aljibe de San José (450 metres)

This Aljibe is next to the Church of San José (Calle San José Alta) as we walk from the Albaicin back into Plaza Nueva. This aljibe has capacity for 71 cubic metres and was next to the Mosque on the site at that time. The importance of ablutions for the muslim culture made water a key element in daily life.

This is why we have so many aljibes left in the city today.

You can also enjoy a guided tour around the Albaicin quarter.
Booking available below: