The Secrets of the Alhambra Palace: Water

Can you imagine the Alhambra palace without water?

It´s almost impossible to imagine this space without the fountains, pools and water features. Many of the decorative elements of this magnificent monument are created or enhanced with water.

The use of water in the Alhambra palace changed the Sabika hill from a red dusty mound into a lush oasis. Construction in this area of  the city is thought to have begun as far back as the 9th century. 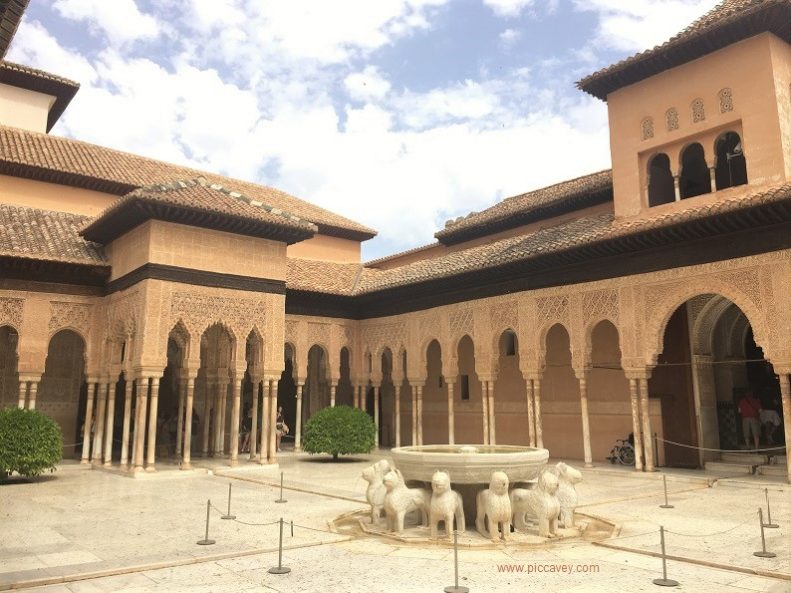 Courtyard of the Lions

Around the 1360´s is when the palace as we know today really begins to develop. The Patio de los Leones or Courtyard of the Lions was built then. Now this is the most emblematic part of the Alhambra. This fountain is said to represent the heavenly garden of Islam. A large bowl sits on twelve lions; each one has its own individual markings and face. Underneath the base of Lion´s fountain run four water channels.

These streams symbolize the four rivers of paradise. Each of the twelve lions spout water into channels below which run across the marble courtyard, creating movement and sounds across the centre of the palace.

Fountains in the Alhambra

In 2010 a major restoration project helped to conserve the stone lions. Some of the stone and metal parts had rust stains after standing for so many years. This restoration work lasted more than a year. However it didn’t only allow for cleaning up the lions. This restoration revealed far more information about the water supply and engineering of the fountain than was first expected. This central feature had its own water channel. The water supply wasn´t from the same channels which gave water to the Alhambra gardens and fountains.

This had its own exclusive channel which runs in parallel to the main channel from the acequia real. This is a bold and extravagant detail which helps us to understand the importance of the architecture in the Alhambra and the splendor the creators wanted to display.

Priority Skip the Line tickets for the Alhambra Palace

The patio of the lions is the centre of the Nazrid palace. The most beautiful part of the Alhambra palace. All rooms and corridors radiate from this central courtyard and fountain.

So it was imperative that a constant supply of water arrived to this emblematic part of the palace.

The Acequia Real is the main water channel which carries the water supply to the Alhambra palace. This 6 km stretch of water above the Darro River. At the time of Nasrid dynasty this water source was clean and suitable for drinking. This network of channels would have ran along to directly into the Generalife Gardens and then through the heart of the Alhambra palaces. The Acequia Real supplied the whole Alhambra citadel with water in a clever network of channels. Water reached all the gardens, plants and even the fountains wih enough pressure and still works all these years on

When you visit the monument you can see the Acequia Real if you lookout for it. Close to the the entrance to Alhambra Palace you can see one of the arched aqueducts. The design of this system ensured a constant flow of water, refreshing this palatial city. The builders made detailed calculations to use the natural flow of the Darro River. They created a pressure which would make the water flow naturally along its course. As well as the channels, several pools storing water, waterwheels and other devices made this system work.

In 711 Arab settlers had already discovered roman water channels. The engineers for the Alhambra made use of this existing framework to create their own system. Expanding and improving what was already there. They built main channels and sub channels to create a large network. This system also encouraged agriculture in the area. It was working up until 1492 when the Catholic Kings took over Granada. They didn´t understand this system and it did not maintain it well. The Arabs carefully cleaned this water network each year to secure their clean drinking water.

Next to the Puerta del Vino and the Torre de la Vela you come to a large open space known as the Plaza de los Aljibes. This means the square of the water tanks. Aljibes are large deposits for water storage. They are typical in Granada. Many of them are still in the Alhambra and Albaicin neighbourhoods. In 1494 the Count of Tendilla built a 34 metre long water tank under this square.

Years ago there used to be a kiosk on the square which handed out glasses of drinking water from the underground cistern to thirsty visitors. Now there is a kiosk here but unfortunately just selling beer and ice cream.

Patio de los Arrayanes or the court of the myrtles is a perfect example of the use of water in the Alhambra palace. This elongated pool seems to increase the size of the palace, by its captivating mirror effect. The grandeur of the palace is amplified by reflections of the intricate arches in the water.

The babbling sounds of the small fountain at the end of the pool soothes the onlooker. The myrtle hedge around this pool releases a delicate scent when in flower. The architects considered the all five senses when designing these spaces.

The Palacio del Partal is good example of this mirror effect on the water. The arches of the Partal façade reflect in the rectangular pool. This palace dates from 1302 to 1309, it is the only one within the Alhambra which has remained almost unchanged since the Nazrid period.

El Baño de Comares was called the Royal baths. This bathhouse used by the Catholic kings as their private bathing area in the 15th century. This is an excellent example of an original Hammam still here in the present day. This space is usually closed to visitors to protect its delicate interior. It is the only medieval Islamic bath fully intact in the western world. To see it on your visit to the Alhambra you can see parts of the building from a gallery corridor just outside.

This corner of the Alhambra palace has fascinated many visitors over the years. It even inspired the painter Henri Matisse after his visit in the month of December in 1910. Several of his works were directly inspired by this place.

The ceiling has star shaped openings in the ceiling. These holes are for regulating the temperature and steam inside the baths. Distributed in three rooms. The cold room, the warm room and the hot room. The importance of cleansing as a religious rite was not only an important part of daily life but a social activity too. This practise was later prohibited by the Catholic kings soon after their conquest. In 14th Century Granada there would have been many Arab bathhouses but sadly only a few examples remain. El bañuelo in Carrera del Darro is another example which you can still visit today.

Here you can see water shooting up forming silver arches above the plants and the rectangular pool. Similarly the large courtyard also offers views over the city of Granada on the left of this patio.

However my own personal highlight in the Generalife gardens is not this area but the Escalera de agua. Known as the water stairs this feature dates from the 16th century. It is a long staircase set amongst bushes and trees. It has water splashing down inside the hollow hand rail and is a unique and eyecatching sight.

The architects of the Alhambra certainly knew how to use the abundance of water to reduce high summer temperatures. Also knowing how to amplify the prestige and power of the monarchs of the time.

What was your highlight of the Alhambra palace?