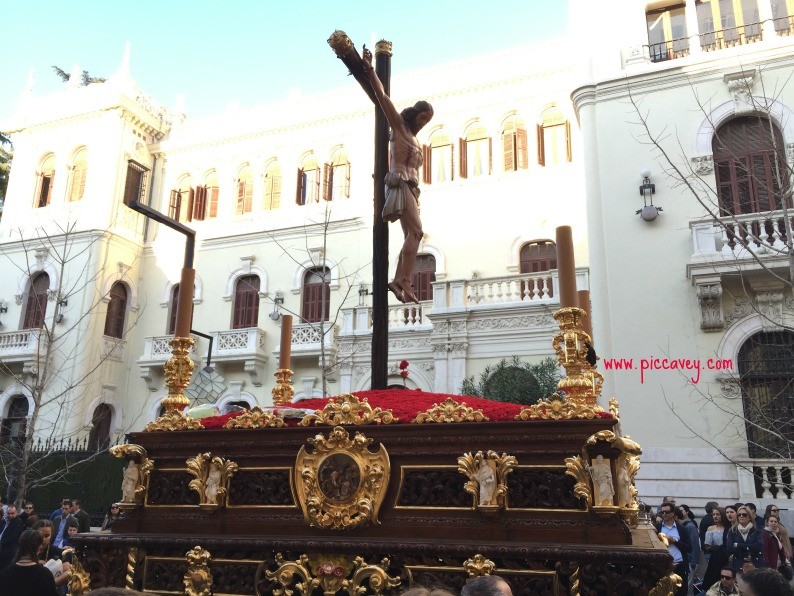 Holy week is really important throughout Spain, although in Andalusia it has a special significance for it´s people and is deeply rooted in Southern Spain´s calendar. I am not particularly religious. However it´s hard to ignore the fervor with which the different groups prepare for this week every year.
They dedicate many days to their training and preparation, just after Epiphany has gone, in mid January they start to prepare the groups and decide who will be in which place. The men chosen to carry the float are measured by their height, the wooden beams underneath are altered according to their heights and the order of the carriers, so that it fits the shoulders of the team below the structure. Here is the Easter week timetable – Granada here you can see the routes of the processions for the city of Granada.

The link is in English and organised by the days in the Easter holidays.

Then there is this great tool for your smart phone. This allows you to Locate the procession real time to see which part of the route it is on. Love it!

At this website Guia:Semana Santa you can see information and routes for other Andalusian cities, such as Malaga, Seville or Almeria in English
The processions comprise of two images or figures, one of Christ and the other is the Virgin Mary.

Both figures are decorated with many candles and flowers and the whole group to puts in alot of effort to make everything ready in time for the procession. The figures are set upon float, with a metal and wooden structure underneath which is usually borne by men. Depending on the size and the total weight the number of carriers varies.
Behind the float in each procession there is a brass band (or maybe even 2) which plays solemn music, marking the time and rhythm that the procession should move along to. Alongside of the float are ladies in elegant black suits or dresses with lace shawls and gloves. These are called camareras (literally waitresses) they typically carry crosses or large candles.

The penitents are completely covered, a pointed hood, with just small holes for their eyes. Can be quite eerie as they are anonymous, only seeing their eyes or sometimes their feet if they are walking barefoot. Their robes are different colours depending on which brotherhood and church they belong to. Before the actual processions you may visit the floats which are prepared and gleaming in the actual church when the brotherhood is based. This is a good way to see the intricate detail of the carvings and sculptures of the floats and be able to take a few photos without crowds of people. In Granada as the different processions move from their churches towards the centre point, the main Cathedral they can be moving very close to each other, you can see one ´Cofradia´ pass by and move two streets along and see a different procession going along the next street. The streets smell of the fragrant incense that is burnt as the processions go by.

In Loja, west of Granada they have a special tradition dating back to 1765. Read about the: Incense bearers This lovely pictures is from one of  my favourite moments at Easter, a children’s procession at Campo de Principe, just below the Alhambra.

One of the most popular processions in Granada is on Holy Wednesday, El Cristo de los Gitanos (The Christ of the Gypsies) leaves from it´s church on Gran Via and goes up the Albaicin and continues to the Abbey of Sacromonte in the early hours of the morning. There are bonfires lit along the Camino de Sacromonte and people singing traditional Saetas to the virgin along the way. This route has steep slopes which makes it more difficult for the costaleros to continue with the procession, there are very narrow parts along the road too. In Spain there are no mini eggs, creme eggs or hot cross buns. Things are much more traditional.

There are many cakes and pastries that are typical at Easter, Leche frita is a square sweet dessert, cut into pieces, similar to the filling of a custard tart. Buñuelos are like doughnuts or sweet fritters are also abundant at this time of year and in some places they make a round sweet bread with an egg in the centre which is called Hornaza de Pascua. My two personal favourites are Torrijas which are delicious, thick slices of bread soaked in milk or red wine, covered in egg and then dusted in cinnamon.

I also adore Pestiños which are found all year in the Alpujarra area, they are crunchy biscuit like tubes with a sweet covering, often with a dash of aniseed liqueur in the batter. (they appear on the photo above, in the centre towards the front of the image)

Food during Easter week is generally based around Fish, mainly cod, Spinach and chard and chick peas. No meat is consumed in traditional Catholic homes.

I almost forgot, be careful walking along the street around at Easter, the pavements and roads are coated with a fine film of invisible candle wax making the places where the processions pass through slippy for days afterwards. Enjoy your Easter break wherever you celebrate it, and if you are in the UK have an Cadburys creme egg for me!