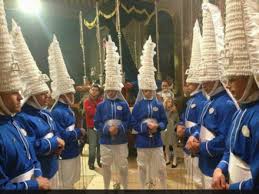 Our Easter holidays are now behind us and we are probably already thinking about Summer holidays. But just before we finish the last Torrija or Cadburys creme egg I want to share this little known tradition about Holy week in Loja, Granada. Loja is just a short drive from Granada. The traditions celebrated in this location each Easter are quite breathtaking.

They have Easter processions as do other places in Andalusia. But this place is different, they have the Incensarios de Loja.

It is unclear how old the tradition of these figures is. There are records of their appearance right back to 1765. Although the chants or saetas which are sung by the Incense bearers are very similar to ones in the 16th century. As you can see from these images, the most striking part of these incense bearers are their headdresses. This is called Morrión in Spanish. It is covered in Silk or satin fabric. There is a larger piece of fabric covering the neck which is slightly different in each group. The headdress is decorated with semiprecious Jet gemstones. This tall hat weighs about 2 kgs and is fastened with a strap across the chin. The cost of making these is very high, estimated at 1000 euros and usually these are passed down in the family. There are currently 10 different group called Corrias. They each have 8 men. They wear the morrion hat and carry the incense burner on a long chain in front of them. I was lucky enough to see a unique performance in Granada last year (2012) when they were invited to take part in a procession in Plaza Nueva and Paseo de los tristes. Hopefully I´ll visit Loja one Easter and see them again.

They actually remind me slightly of Morris Men in England.  This tradition dates back to the 15th century. The groups of men, dancing in line formations and singing.