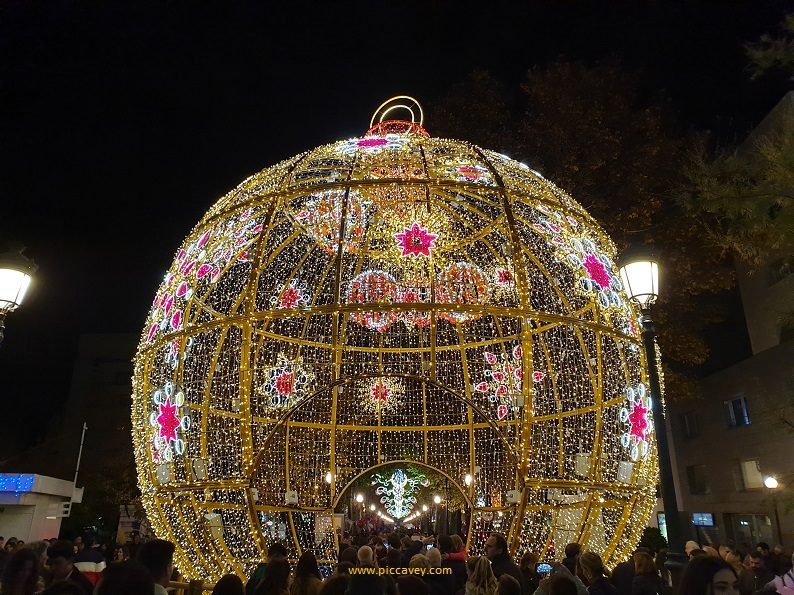 Granada Christmas festivities begin around the 1st of December and end on the 6th of January. According to Spanish tradition, the big celebration is actually Epiphany with the three kings bringing gifts on January the 6th.

So the Spanish Navidad has plenty to offer with a whole month of activities.

Timeless traditions, delicious food and lots of light and colour.

In this guide I include things to do, local traditions, what to eat and key dates in the Spanish Festive Calendar. There are also opening times included too.

Hope you enjoy it and find it useful! Feliz Navidad

10 tips for Christmas in Granada 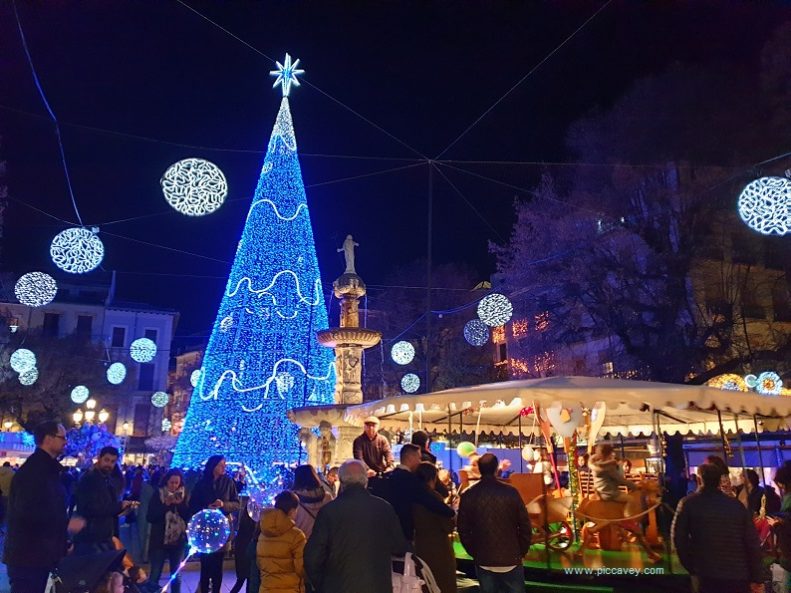 On Friday 29th November 2019 in Bib Rambla Square the city Christmas lights will be switched on.

The new addition this year is an enormous walk through bauble at Fuente de las Batallas. With a light and music show at 7pm everyday.

Puerta Real, Gran Via, Reyes Catolicos and the main commercial streets in the city centre are where the most lights are visible.

In the UK and Nordic countries, the switching on of Christmas tree lights is usually an important event. In Granada, the Nativity Scene is the main feature in most shop windows and offices. Christmas trees are not quite as abundant as in other countries.

In the official Belen competition run by the local town hall around 40 organisations compete. However there are actually many more unofficial displays around the city. Every year in Granada has a Ruta de Belenes so you can visit all the nativity scenes.

All the scenes on the route are open from 11th December until the 5th January. (with their own timetables) 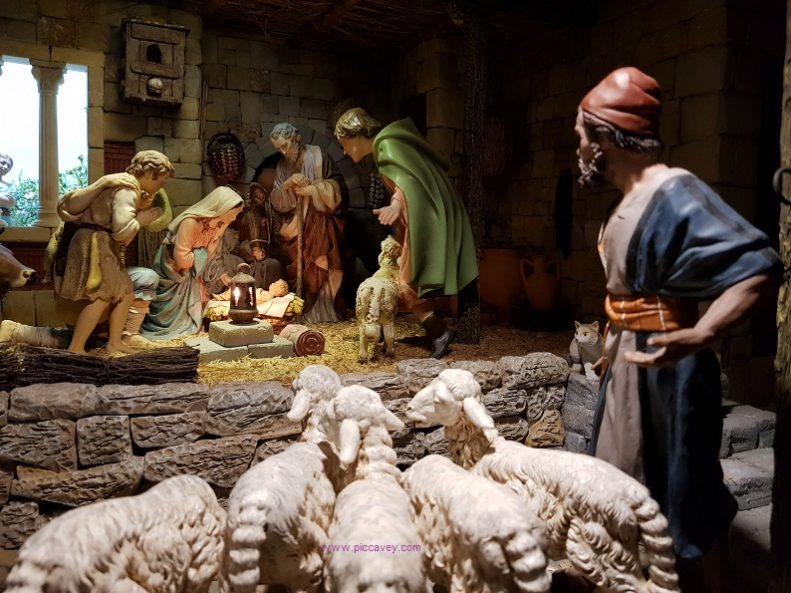 Some of the most popular Belenes are:

Do keep an eye out for signs that say Belen as some set up their own in a garage or small business. 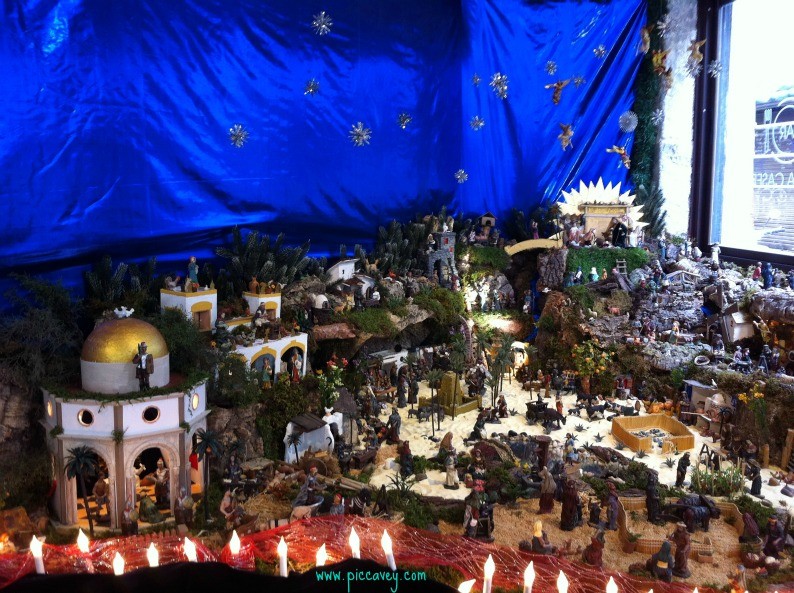 There are lots of Flamenco concerts and typical Rociero choirs on over Chrismastime. At the Teatro Isabela la Catolica they have shows throughout December and a few in January.

This year they have a typical Flamenco Zambomba on 18th December, the Nutcracker Ballet on 19th December or the Beauty and Beast Musical on 22nd December.

The stalls are closed on 25th December and 1st January.

Find out more about Christmas markets in the city

Christmas Around the World 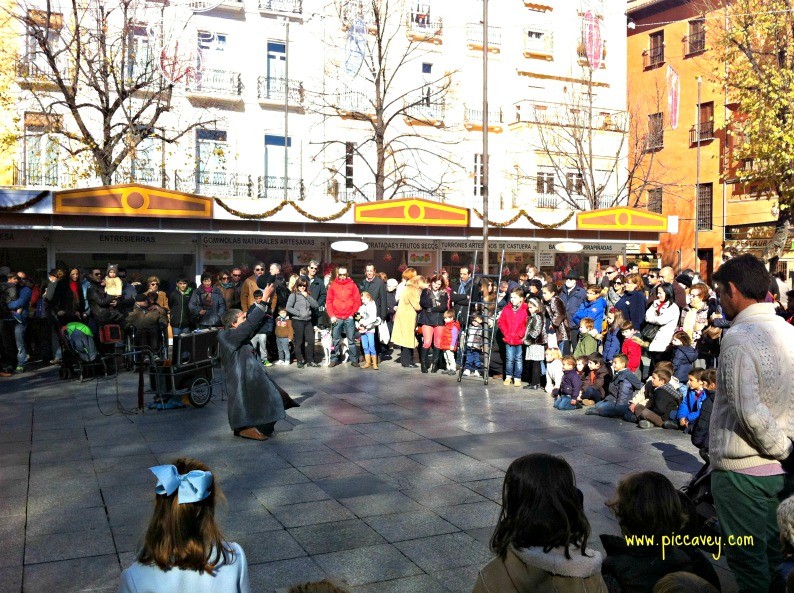 As last year on the Paseo del Salon next to the river there is a Huge Slide. The tobaggan style inflatable is open from 7th December until 6th January 2020. 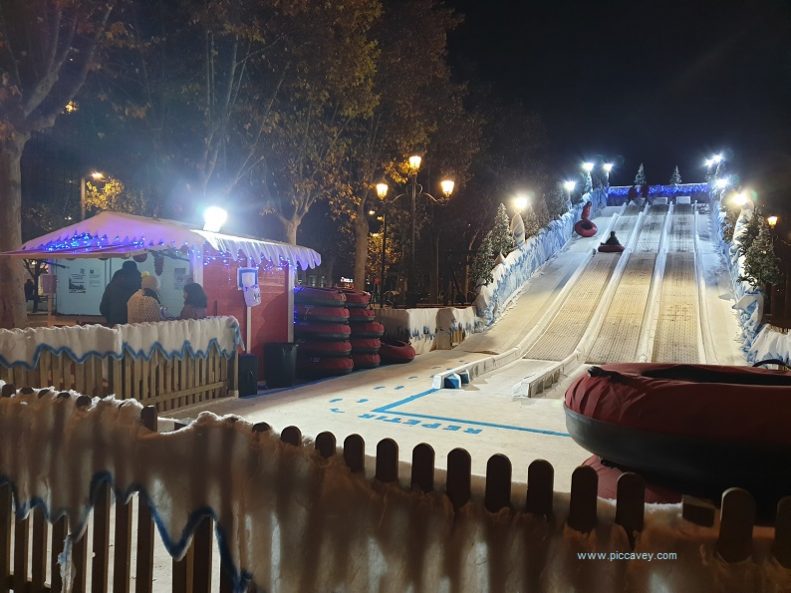 Little ones may enjoy visting the Cartero Real at Granada Town Hall. (plaza del Carmen) Its the Spanish equivalent to Santa´s Grotto. One of the three kings is ready to accept your Christmas List from 20th December until 4th Jan. 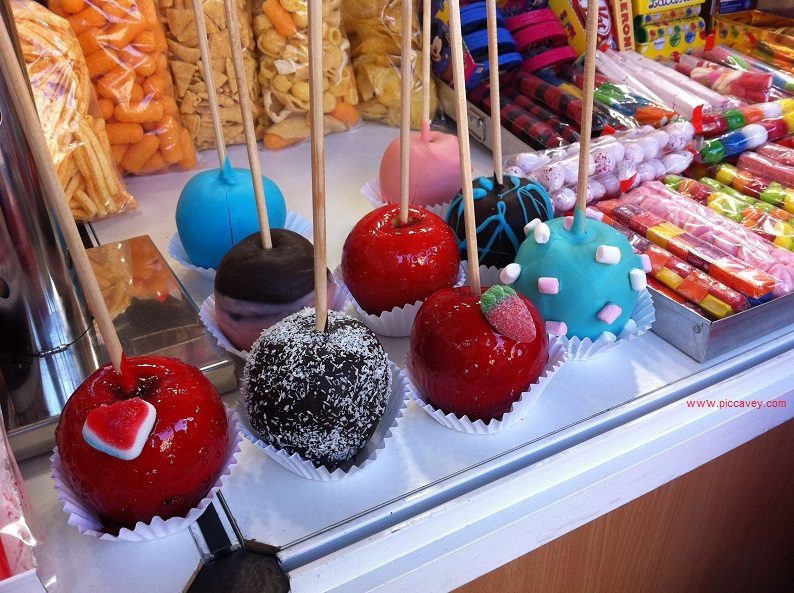 Ice Skating is another activity that youngsters might enjoy. Don Patin has public sessions for just 5 euros.

You need to take gloves with you and warm comforable clothes.

Can get the on the Metro to Palacio de Deportes or by bus on 4 route.

What to eat in Granada Spain Christmas

The Spanish celebrate Christmas eating lots of Shellfish. The main meal on Christmas Eve is often turkey or lamb.

Chocolate and Churros of course are the best Christmas breakfast for an indulgent start to the day. Sweets are typical too, particularly Marzipan figures and lots of almond nougat which they call turron. Polvorones and mantecados are popular as well. (mantecados are made with flour and LARD)

Restaurants and bars will be open over the Christmas period continually. It is recommendable to book on special dates or if you are a group of 4 or more. 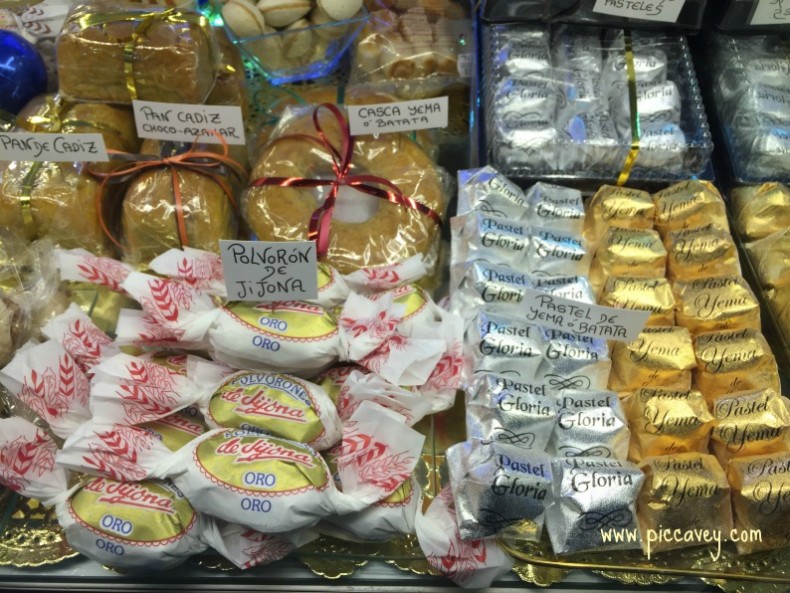 The days that most of them will be closed are:

For information about New Year and Reyes. See my New Year Guide to Granada

Visit the Alhambra Palace over Christmas

Opening times in wintertime are Monday to Sunday from 8.30am to 2pm and 2pm to 6pm.

The ticket office is open from 8am to 5pm.

Tickets to visit the Alhambra palace are already sold out on some of the days near the Christmas holidays.

If you would like to visit around this time, book as soon as you can. More details here: Get Alhambra tickets 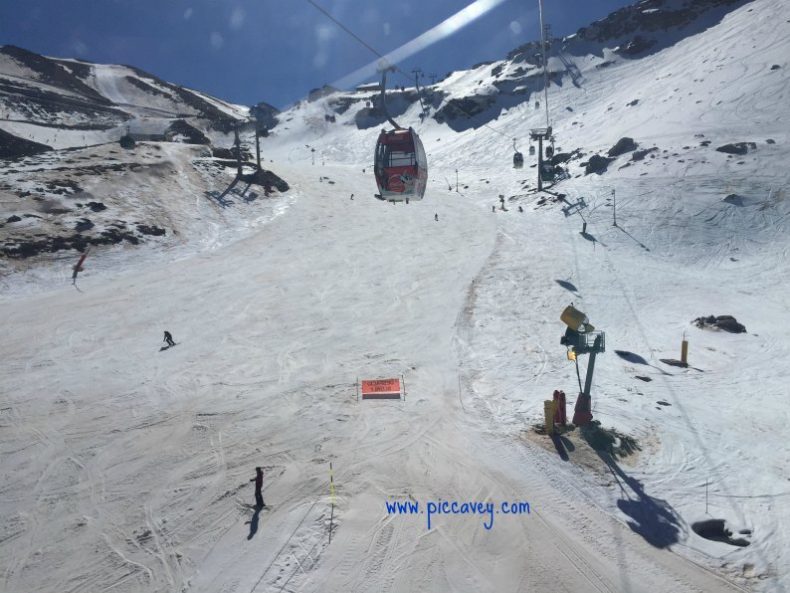 Choose to stay there or just head up on a day trip from the city.

If you choose to drive up check road conditions as some parts of the mountain road may need Snow Chains when you reach altitude depending on the weather.

The official website Cetursa has information in English. AEMET is the Spanish weather service.

A typical Granada Christmas in the mountains can be quite cosy and festive being surrounded by snow.

Plan your Christmas in Granada 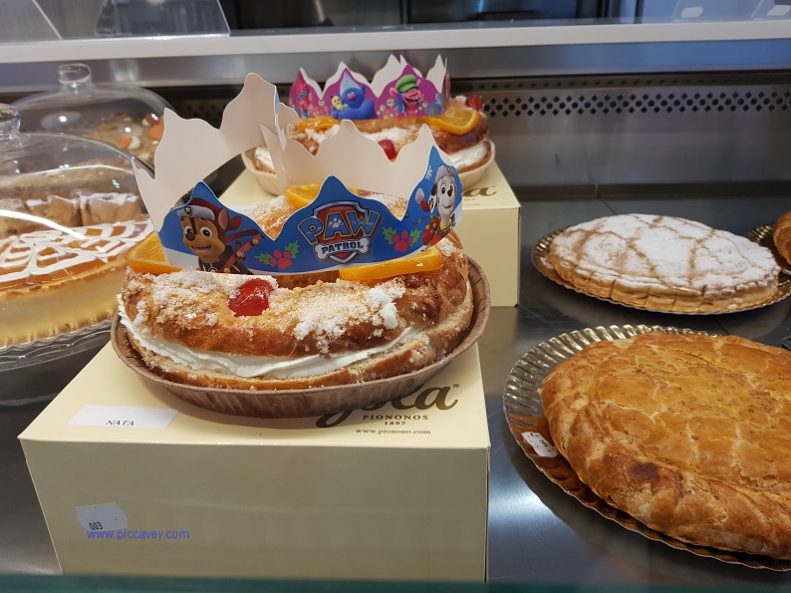 Brush up on your Spanish while enjoying a Granada Christmas 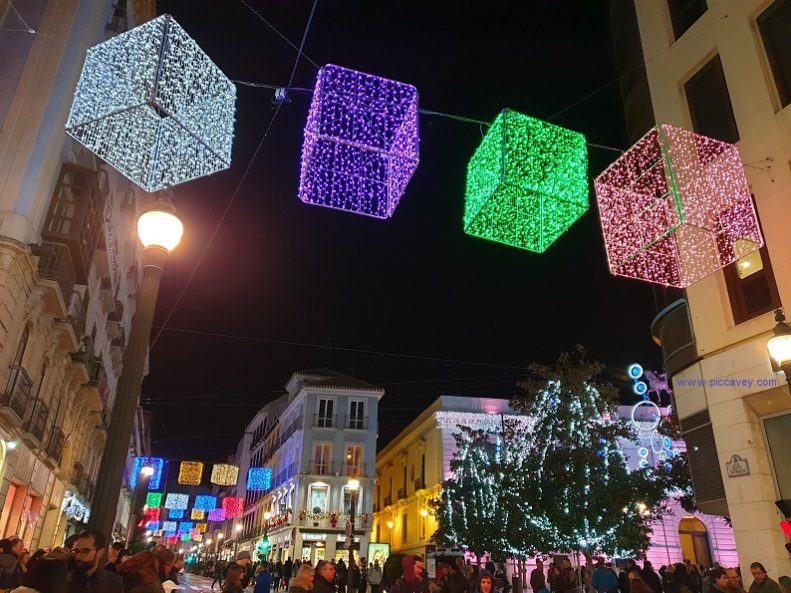