Paella in Spain – A Guide to Eating Spanish Rice

The Paella had humble origins as far back as the 15th-16th century. Yet has become known as Spain´s national dish. Originally from Valencia and Alicante regions the traditional Valencia Paella is often misrepresented.

An authentic Paella does not have seafood in it. Lets take a look at the Valencian Paella in more detail.

The ingredients in a typical Valencian Paella are the following ones: 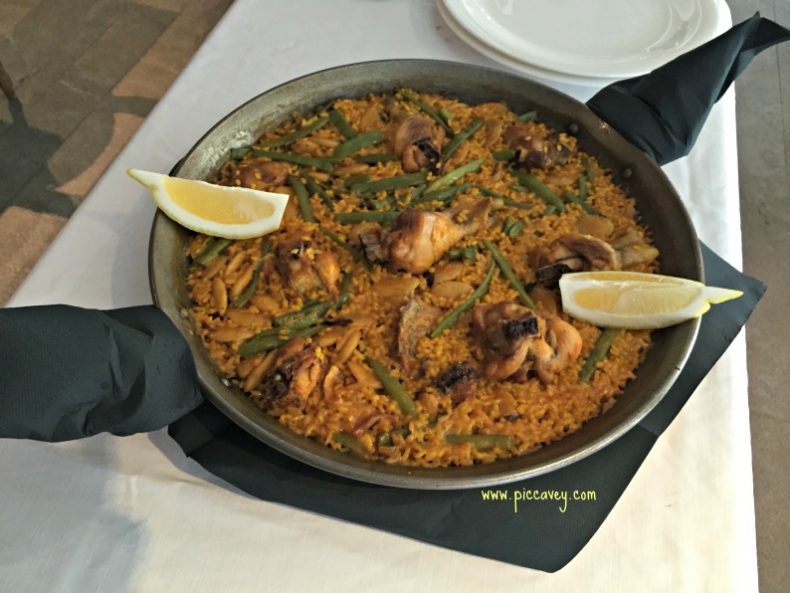 There are no fish or seafood ingredients in the original recipe. However in some areas such as Silla (Valencia) originally they locals would use whatever they had to hand. Rodents such as voles (Arvicola sapidus) found in the marshy areas or Eels would be the protein source centuries ago. Snails or artichokes are sometimes added to variations of this recipe too.

Usually cooked outdoors on a wood fire, traditionally orange tree wood would often be the fuel using for cooking the Valencian Paella.

You may like to learn how to make Paella yourself.

In Valencia the best option for this would be to book one of the official Valencia workshops.

You can book online here: Spanish Paella Course in Valencia

Many say that they key to the Paella is the sofrito.

The base of the recipe is the tomates, onion, red peppers and olive oil. Garlic is sometimes added.

Generally if you have a good tasting sofrito then the rice will take on that flavour as soon as it´s added making sure that the dish is tasty.

Since 1238 rice has been grown in the Valencia region. Although Ruzafa was the original area of rice plantations. Some years afterwards the crops stretched out as far as the Albufera. Around 25 kms (16miles) from Valencia city centre.

This natural lake is the perfect climate and geography for rice, and is now the home of Paella.

To visit this area you can book a tour of Valencia with Albufera included.

You can taste a paella with views of the lake in one of the typical restaurantes. Boat rides around this area are offered when weather allows. The day I visited in April 2019 it was not such good weather  : (

Socarrat is the crispy rice left on the paella pan at the end. This is the mark of a well made Paella. It doesnt always happen.

In the photo below you can see the centre of the pan the crispy toasted grains of rice stuck to the pan. This is what´s called Socarrat.

The rice used in Spain to make paellas is usually Arroz Bomba. If you can´t get that best to select medium grain rice to make it.

The saucepan which a Spanish Paella is made in is actually called the Paella. Rather than paellera, which is the person who is cooking it.

Usually 22 cm across or more. The pan is never any taller than 5-10cm. The pan never has a lid, Paella is always cooked uncovered.

If you remember the controversy caused in 2016 by UK Chef Jamie Oliver. Chorizo being added to Paella caused an outcry from gastronomic critics and Spanish chefs. Calling for Rice with Things to be used for any dish that wasnt an authentic Paella.

As well as the traditional Paella Valenciana, there are many other rice dishes in Spain.

Paella Mixta being probably the most popular.

How to Eat Paella

The Spanish typically have rice at lunch time especially if its a celebration or family lunch out. Rice dishes are not generally eating in the evening. Carbs are not so suitable for late dinners.

Usually it´s a meal that is for a group or a family of more than 4. It can be difficult to ask for a Paella for two people.

I would recommend booking at least one day before to make sure that you are actually getting a freshly prepared one for you.

Where to Eat Paella

Albufera (Valencia) – Restaurante El Rek is located within the Albufera and you can enjoy the view over the paddy fields as you dine. Carrer del Pintor Martí Girbés, El Palmar, València

Xiringuito Escribá. This beachfront chiringuito is run by the same people who have the Confectioners Escribá on the Ramblas. Located on Av del Litoral 62, Platja Bogatell, you can go wrong with this tasty professionally prepared rice with sea views.

Granada– In Granada city centre there aren´t many places that do good rice dishes. Restaurant los Patos Chef Blas Hidalgo is from Valencia. So there is a little bit of of Levante in Granada to prepare fabulous paellas. They serve Rice dishes and Paellas all year round. Calle Recogidas (esq Solarillo de Gracia)

Nerja – Merendero Moreno on Burriana Beach has been in business since 1965. They do paella and rice dishes regularly and are in a typical beach hut set up. Paseo Marítimo Antonio Mercero, Playa de Burriana.

Marbella – Los Mellizos, this busy beachfront restaurant is one of the most established in Marbella and they have a selection of different rice dishes to choose from. Paseo Marítimo, esquina Gregorio Marañón.

San Pedro de Alcantara Marbella – Nuevo Reino is the oldest chiringuito, since 1957 and the one of the best places along the Costa del Sol They dont take bookings get there early. Urbanización Castiglione, San Pedro