Photogenic Seville & its most instagrammable spots

Seville is know for it´s grandeur and it´s colourful April fair.
On my latest visit to the capital of Andalusia, I took many photos around different areas of the city.
I thought it would be fun to share the most Instagram worth spots in the city.
Or best places to get that holiday photo.
I also want to Thank you All!!!
This week I reached 20,000 followers on Instagram Piccavey

This modern parasol above the market is the largest wooden structure in the world.

It is also a great vantage point to see Seville from above. Take in those 360º paranomic views.

Can you spot the tiny people on the top in the picture? 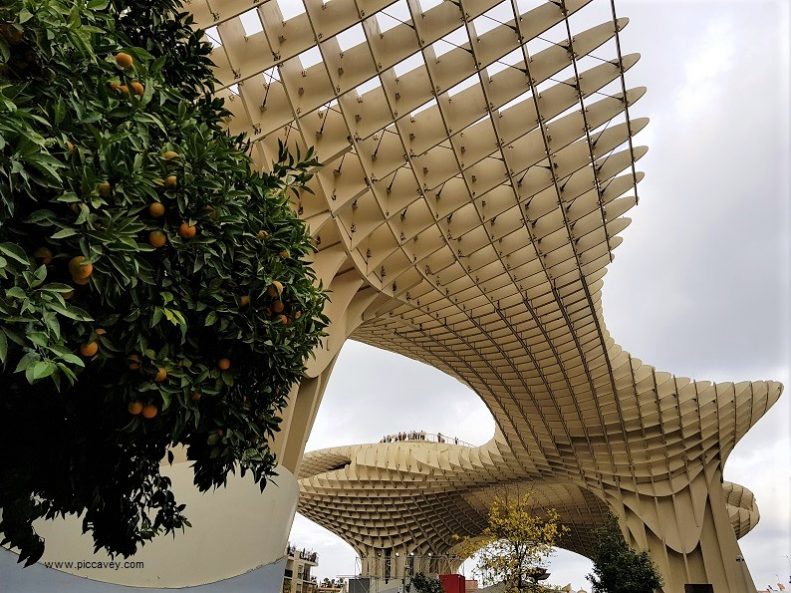 Even my accomodation was Instagrammable.

Located right by the Palacio de las Dueñas and close to the Setas.

It was good to stay in a neighbourhood rather than in the main tourist area.  El Escondite de Maria is a palatial style house divided up into apartments. 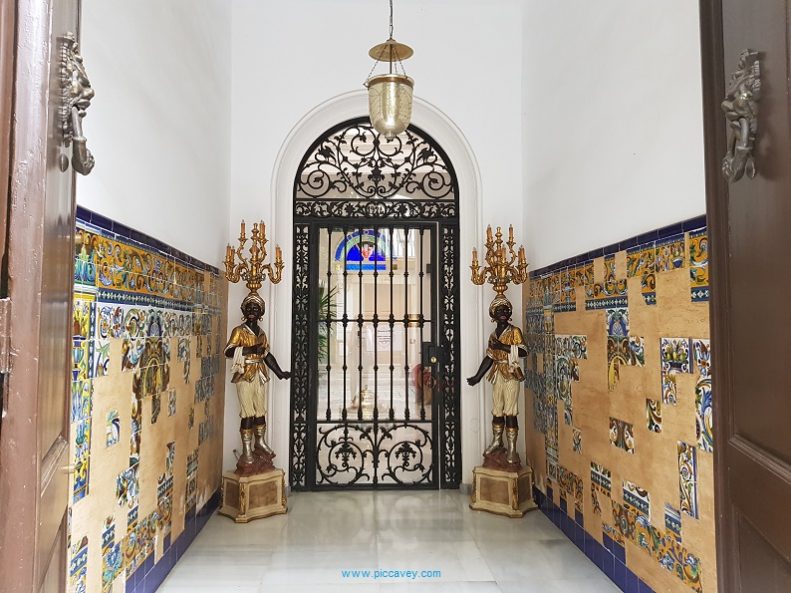 Each one has a different style of interior, all have a bedroom, bathroom, lounge and kitchen area. My apartment was the Arab style one and it even had its own private terrace.

As I was staying in Seville for three days I enjoyed having a small desk to use as an office. The fridge also came in super handy as its hot in Seville in July. So I could cool drinks and keep fresh fruit to hand for healthy snacks during my stay.

I certianly will be returning to El Escondite de Maria sometime 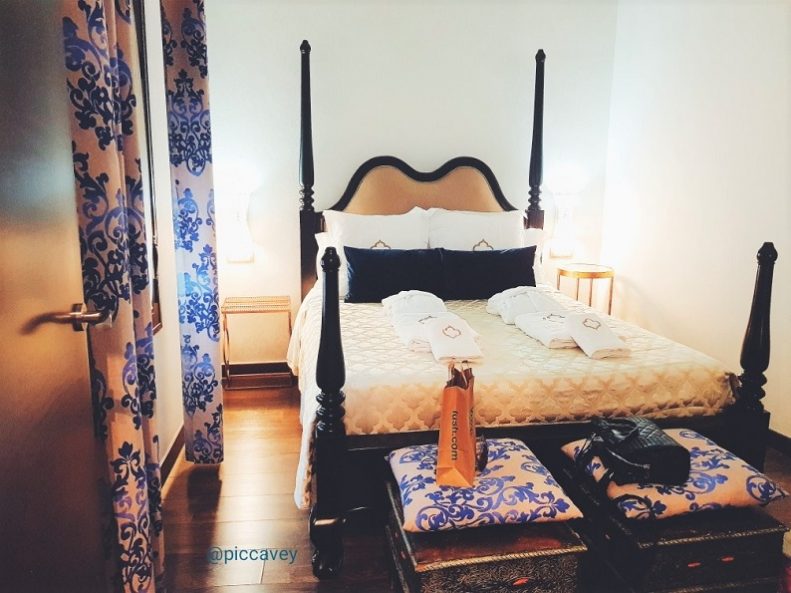 The bathroom here was practical with a huge walk in shower and lots of fluffy towels. I can say that I would stay here again. Well located in the San Pedro neighbourhood, with plenty of shops and bars close by. Nor was it far to reach the main tourist sites in the city. 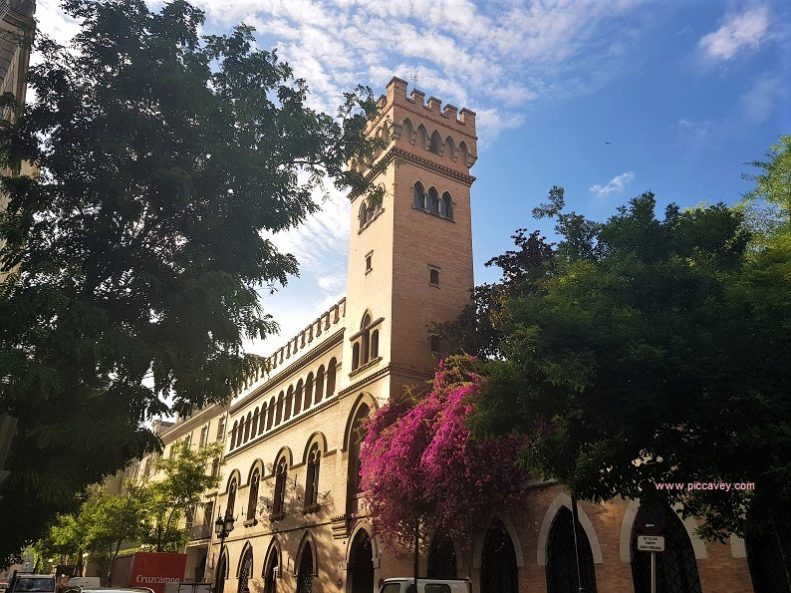 On my way into the city centre I came across this palatial home.

The Motilla Palace was inspired by the Palacio Vecchio in Florence Italy.

Although it´s a modern construction (1920´s) it really caught my eye with its pretty bouganvillea decorating the façade. 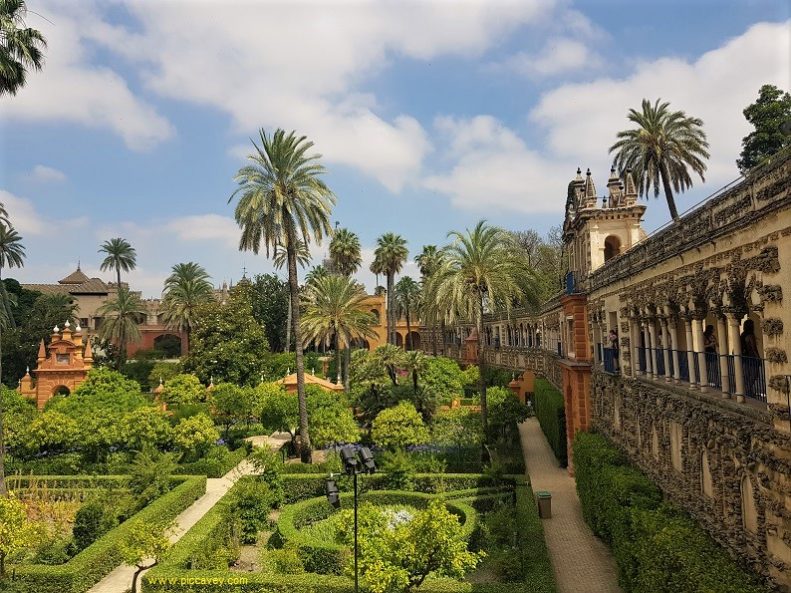 Used recently in Game of Thrones (S5 & S6) the Real Alcazar de Sevilla is a fortified palace with stunning gardens.

I have selected four photos from my visit but I have hundreds more.
It was so pretty in July and all the flowers were in bloom. 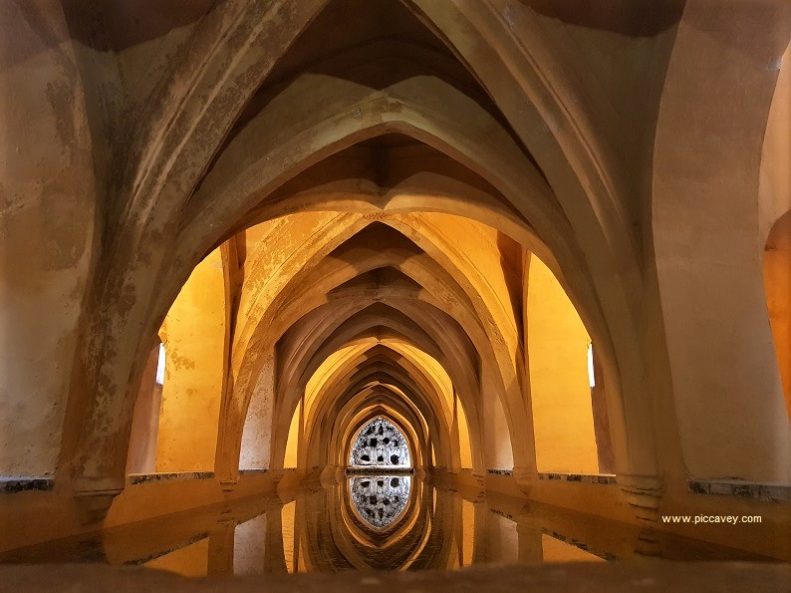 Seen above are the Gardens of the Alcazar and this photo is the Bath house of Maria Padilla.

Tucked away to one side of the garden, this historic pool takes its name from Maria Padilla. A noblewoman in the 14th century as a swimming pool to cool down in the hot Spanish summers. It was also featured in Game of Thrones

This photo of the Bouganvillea is close to the entrance of the Alcazar and looks into the area of the Mercury Pond.

The garden space at this historic palace is quite immense. I got to see about 60% of the space on my last visit. 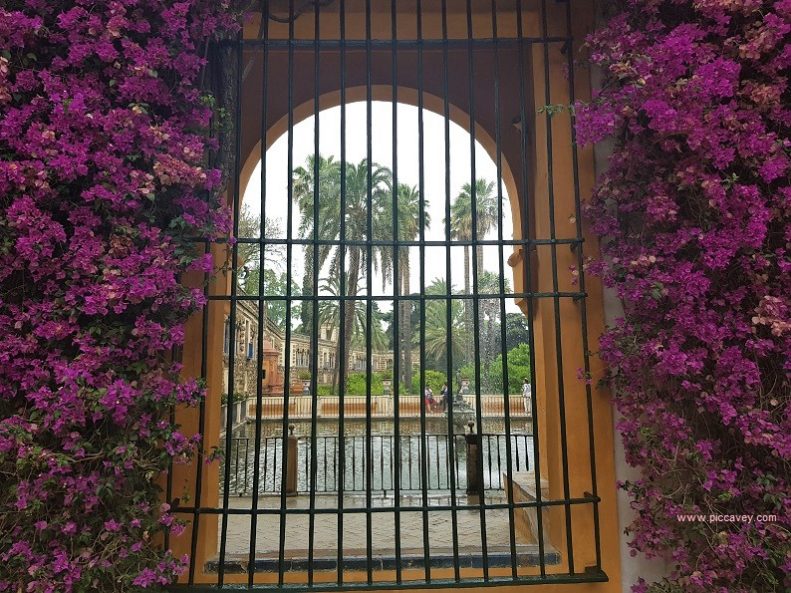 Inside the Real Alcazar, there are many stunning architectural details.

This room called the Ambassadors Lounge has an intricate wooden dome dating back to 1427.

The balconies are a later addition from the 16th century. This appeared in Game of Thrones as the Palace of Prince Doran.

Quite apt as its original use was a Throne room. 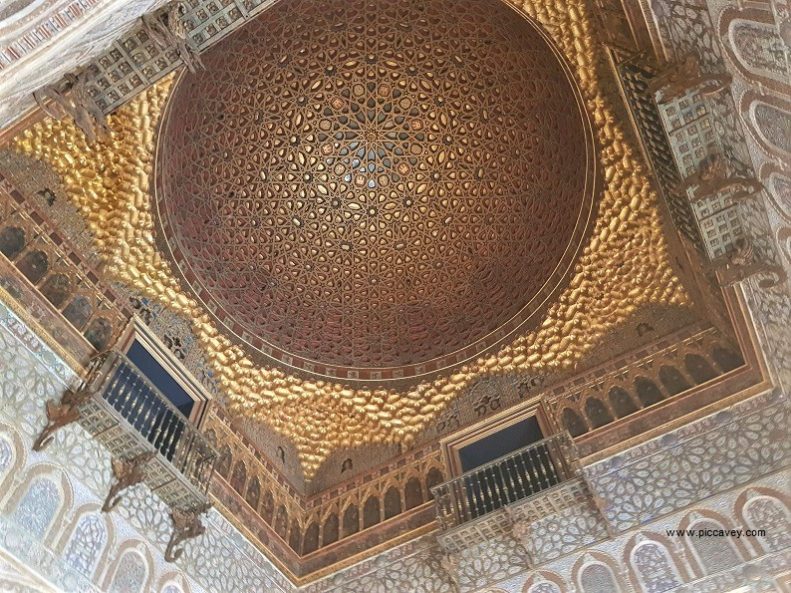 The name of the belltower of Seville Cathedral is La Giralda.

The architecture style on the Koutoubia in Marrakesh, it does bear a clear resemblance. If you are feeling strong you can climb up the inside of the Cathedral tower. The ascent is up concrete ramps rather than steps.

Once you get up there the views are worth a photo or two.

At 104 metres high it was the tallest building in Spain for many centuries.

The Cathedral does get busy. If you book your tickets online ahead of your visit you can skip the queue. 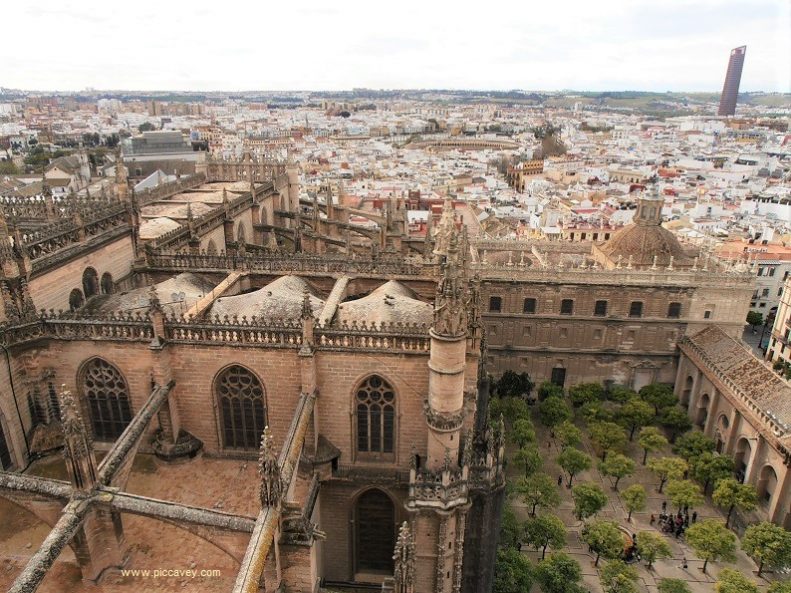 In this close up of the tower you can see the figure of the Giradillo. Added in 1568 its 3.47 metres tall and made of bronze.

There is another Giradillo right above the Cathedral entrance when you go in. So that you can appreciate it in more detail. 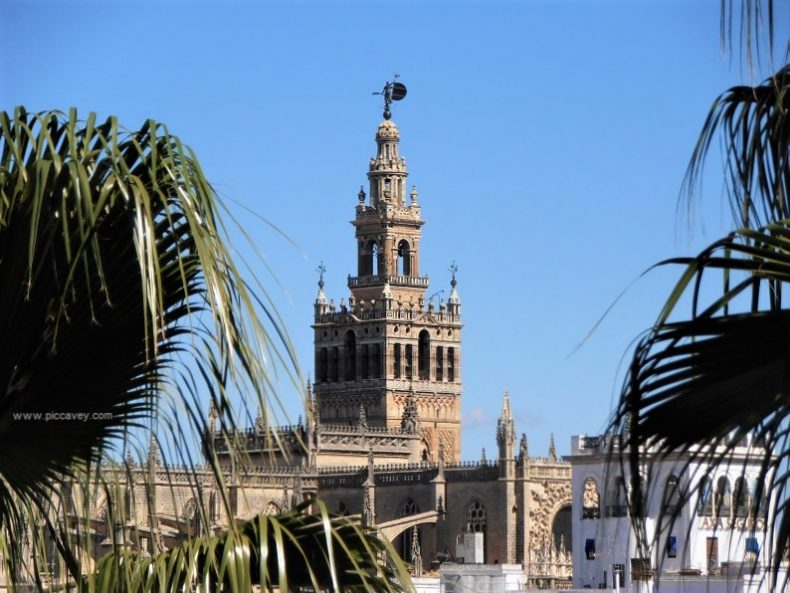 One of the best things about visiting Seville is the bar culture. Eating tapas outside in the sunshine with views of the Cathedral. Sampling some of the typical cakes made to traditional recipes.

I learnt about the gourmet side of the city on this Seville Food Tour back in February 2019.

To one side of the Cathedral on Avenida de la Constitution. Seek out a small alleyway to this charming square. Inside there are private apartments and a small shop selling cakes made by local nuns.
On one side of the square there is a 12th century ruin. This ancient wall was part of the Alcazaba fortress of Seville.
On Sundays the Plaza del Cabildo is the location for a collectors fair. Stamp collectors and old coin dealers sell their antiques here weekly.

A watchtower located on the riverbank. In the 13th century there was a tower on either side of the river, but the one on the Triana riverbank didnt survive. Built in 1221 this medieval structure has had many uses of the years.

These towers were for collecting taxes and controlling ships coming into the city. Nowdays it is a Maritime Museum.
Centuries ago they named it the Golden Tower, as the colour of the stone shines gold in the Seville sunshine.

This square was the setting for the 1929 Iber-American Expo.

With a boating lake and 50 ceramic alcoves representing all 50 Spanish provinces.

You are spoilt for choice for pretty photo locations in this square.

There are also horses and carriages trotting around this area. I also came across this Flamenco dancer.
Seville has plenty of good Flamenco shows although this one was an impromptu one I came across that day.
This area is busier on weekends and festival days when the locals are off work.
Parque de Maria Luisa is on one side of this square.
Inside the park some of the Pavillions from the Expo are quite ornate and colourful.
To walk in the park and visit Plaza de España wear comfortable shoes as there is quite a distance to cover. 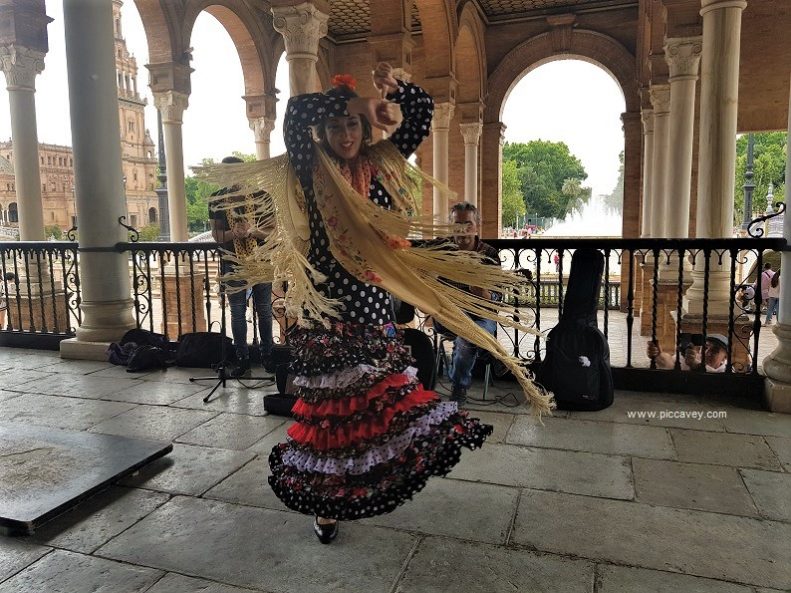 Built in the 15th century this palatial home belongs to the House of Alba.

Although it wasn´t opened to the public until 2016, it is now one of the most popular tourist locations in Seville.

Get your Skip the Line tickets for Palacio de las Dueñas

The columned patio with its typical yellow colour and lush greenery is the main draw for any visitor.

Find out more about Seville:

Ecija: A Must See City in Sevilla Province 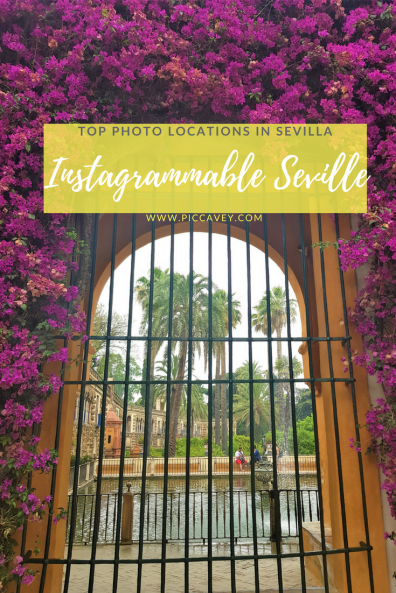 A note to the reader