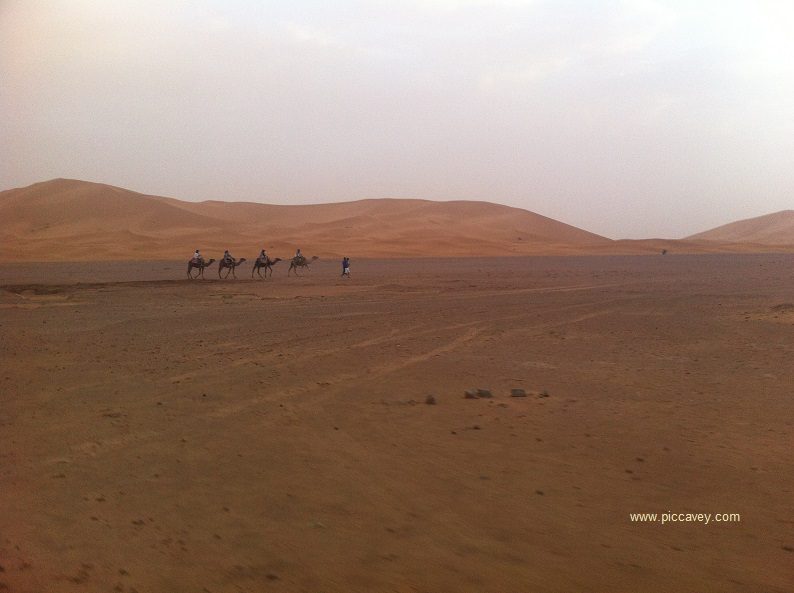 The last week in August I took a short break in Morocco. Rather than just heading out to Marrakesh. We took a road trip. My journey began with a flight Seville to Marrakesh. After arriving at Marrakesh airport our Berber driver picked us up and we drove out towards the Atlas Mountains. The 3 day route would take us South right down into the Sahara desert and loop back to Marrakesh. 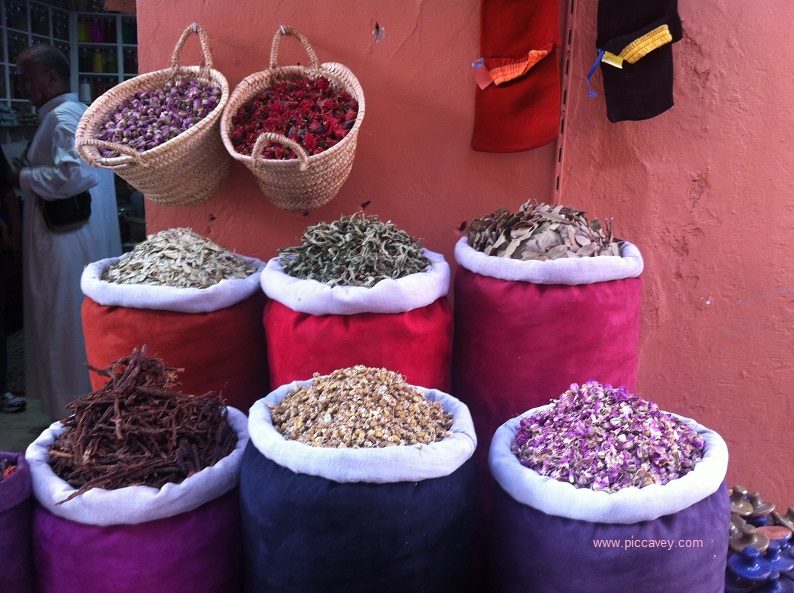 This was my first visit to Morocco (a new continent too: Africa!) so I was quite excited to discover a new destination. Although it is just a short flight from Andalusia it seems world´s away.

Check out these Activities + Tours in Marrakech

Here are some of my trip highlights:

This World Heritage site is located in the foothills of the Atlas mountains. Made in traditional earthern construction, some of the buildings in this Kasbah date from the 17th century. The deep coloured walls are decorated in patterns at the top and especially on the external towers and doorways. This suffers rain damage when they have storms. It has to be rebuilt and maintained after the rain. Only 8 families live here now and maintain the kasbah.

This location has been used to film many Hollywood films such as The Jewel of the Nile and Babel.

More recently it was the location for scenes in the TV series Game of Thrones. It is so photogenic too… Morocco with its Riads has so many Instagrammable spots.

As I wandered through the fortified village early on my first morning, I came along to a small souvenir shop. Outside they had a display of hand made jewellery and artwork. The owner welcomed me inside to his shop. It turned out that Hamid´s shop appeared in the film Gladiator with Russell Crowe.

The shop was also his home. A cave area inside had been used as the prison in scenes of the film. In the photo above I am holding props from the film, a shield and spear. Hamid was an extra in Gladiator and was given these props after filming was completed.

The crew were there almost a year with the filming and preparation.

After visiting Ait Benhaddou we hopped back into our car to see the Route of the Kasbahs.

Route of the Kasbahs

This route has 52 different Kasbahs along its length. This typical berber architecture looks castle like with turrets and imposing towers. Although some of the Kasbahs are more humble. One of the more impressive Kasbahs we visited was at Skoura. (photo above)

The sharp contrast in the stark burnt orange clay and the lush groves of Palm trees along this route is quite breathtaking. This was one of my personal highlights of my time in Morocco.

After a short while on the road we came along to the Todra Gorge. A dramatic gorge with a wide river at the bottom, the stone walls are around 300 metres high. It was a busy day with locals refreshing themselves beside the water and setting up picnics. Lots of children were splashing through the shallow water and playing. We stopped here in a charming restaurant for lunch.

Many of the meals we were offered was Tagine and always followed by a fresh mint tea.

Continuing after lunch along out route we drove to the Rose Valley. This area produces damask roses used for cosmetics and perfume. We stopped off a Kelaat M´Gouna. The main street is bursting with shops lined with pink products. Rose water for misting your face, Rose face cream and of course Rose based perfumes and oils. There were also rose buds on sale and other local products such as orange blossom water and almond based cosmetics.

Each May the town celebrates a two day Rose festival coinciding with the beginning of the harvest. 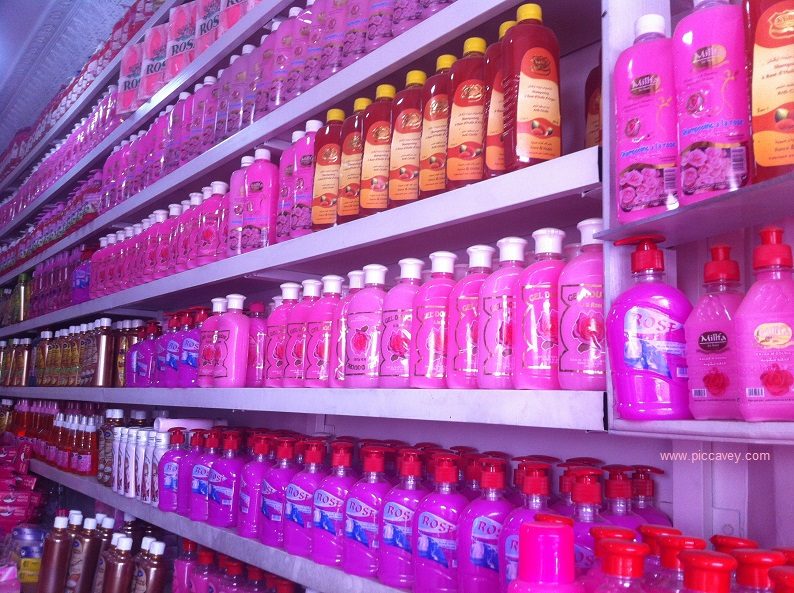 As we travelled further South the temperatures rose steadily. Luckily we had a 4×4 with good air conditioning. So as we travelled across Morocco we didn´t suffer the hot August temperatures too much. Our next stop was Erfoud. This area is an interesting location for geologists and fossil hunters.

The town is on the edge of the desert and is a hub for tours leaving to go into the Sahara desert. Warehouses set up in the area selling fossils from the nearby sites. Erfoud is considered to be the Trilobite capital of the world. The land is rich in fossils from the Devonian period. Ages ago the area was underwater, now the land is the edge of the desert.

As we left Erfoud behind the main road didn´t last for long. We soon headed off onto a dirt track. It wasnt long after that the 4×4 begin to wheel spin in the deep sands. As we got further into the desert it was clear that we had to change to another kind of transport.

The nights accomodation was to be in a desert camp. The only way to reach there would be by camel. So we got as near as possible and then called in for camels.

I had heard that riding a camel was uncomfortable. As I got on the camel and it stood, that was probably the most daunting part. The camel began to move forward I was holding on tightly. At this point I tried to look out to see if the dunes were going downwards or upwards. Then able to ease myself forwards or backwards. This helped alot with the momentum and comfort too.

Ships of the Desert

I found the camel ride quite smooth and not at all bumpy as I´d expected. We had a 3 kilometer trek to the camp which was quite a long ride (50 minutes) at camel speed. The wind got up as we were towards the end of the ride. Now know why they wear headscarves in the desert. Very handy to cover your face.

As we arrived to the impressive desert camp night fell. Outside lanterns lit with candles marked out the edges of the camp. A dinner fit for a king awaited us. Our individual tents were fitted with a bathroom area with shower and flushing toilet. We had plenty of space and large comfortable beds too. 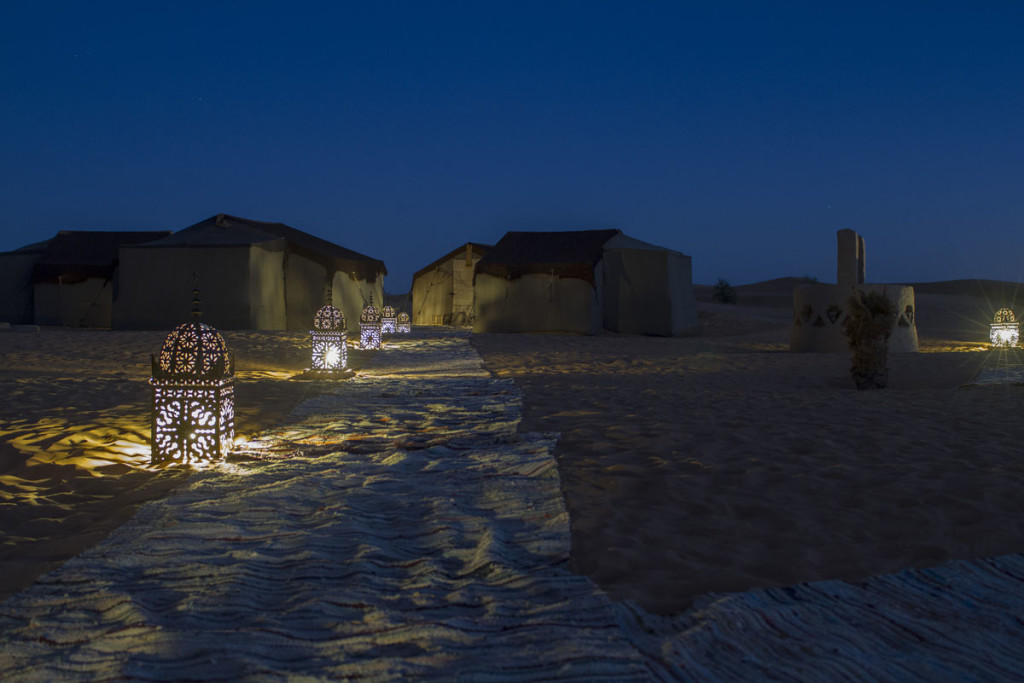 The silence in the desert was wonderful. I got up at 6am to watch the sunrise, sat above a sand dune. An overnight stay was an adventure and I´m really glad I got to go. That morning we left the camp headed back to Marrakesh. 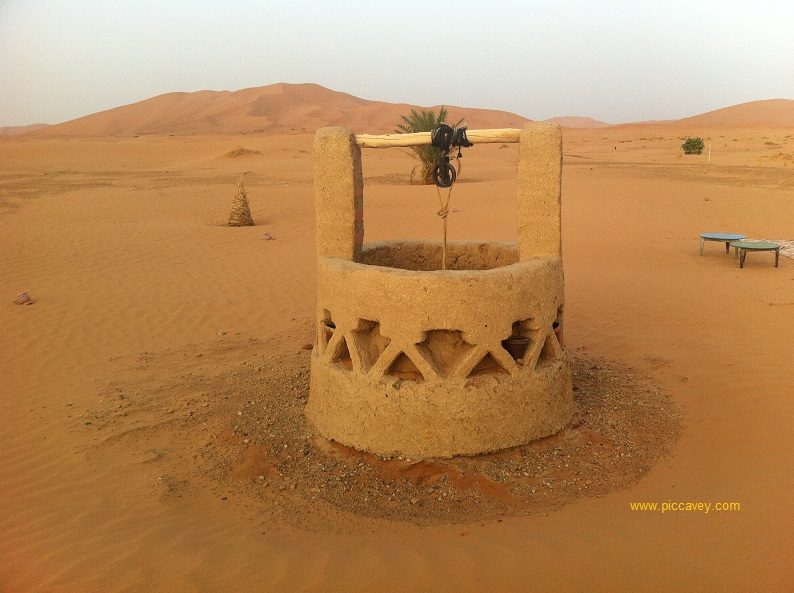 I would recommend visiting Morocco in any month rather than July/August.

When we visiting the temperatures were extremely high.

At night 26-32ºC was the minimum and in the daytime it could be anything from 30ºC to 45ºC depending on the location.

I would recommend staying at the Riad Madu rather that at the desert camp especially in Summer months.