Ronda is located Inland from the Costa del Sol, at the heart of Malaga province.

Often a place for daytrippers from the Malaga coast. I think that a daytrip doesnt quite cut it. There is much more to see in this stunning Andalusian town than you first may think.

Famous for its Puente Nuevo and dramatic gorge in the centre of town.

Many often overlook the lower part of town or don´t visit some of the most important historic sights.

The name Ronda came from its previous name Arunda. Named by Celtic settlers in 6th BC. The word Arru means split, gorge or depth. Later Roman settlers modified Arunda to Ronda in 209 BC (approx)

There is no guided tour here. Follow the signposts at the ruins. History lovers will be fascinated with the archaelogical site close to Ronda, Acinipo. Founded by Phoenicans, it is often referred to as Ronda la Vieja. At this site you will see Roman ruins of an ancient theatre and roman baths. (Only accesible by car).

Another archaelogical site near to Benaojan is the Pileta Cave. Out in the countryside Cueva de la Pileta has Neolithic paintings estimated to be 20,000 years old.

Ronda is known for its literary connections. Attracting artists musicians and writers over the centuries. It even has its own mural to Romantic Travellers. Names such as Washington Irving, Richard Ford and Ernest Hemingway were inspired by this Malaga town. For whom the bell tolls probably being the most reknown work depicting Ronda at the time of the Spanish Civil War.

More recently Ronda appeared in the Disney Film Ferdinand. In this animation film about a bull who doesn´t want to fight, the Puente Nuevo appears and also the bullring.

Ronda is perched on the edge of a deep gorge. This bridge is 120 metres from the valley floor so it can be quite daunting if you look down towards the river. Built in 1785, if you take a closer look and you may see the other bridges crossing the river. The new bridge, the old bridge and the smallest of the three, the roman bridge. (roman bridge was damaged in floods in Winter 2018)

The main commercial street in Ronda is Calle Espinel. Packed with shops and locals dashing about. This leads right down to the Bullring and historic centre.

The building on the edge of the puente nuevo is the Parador de Ronda. This luxurious state run hotel has views from its rooms over the gorge. 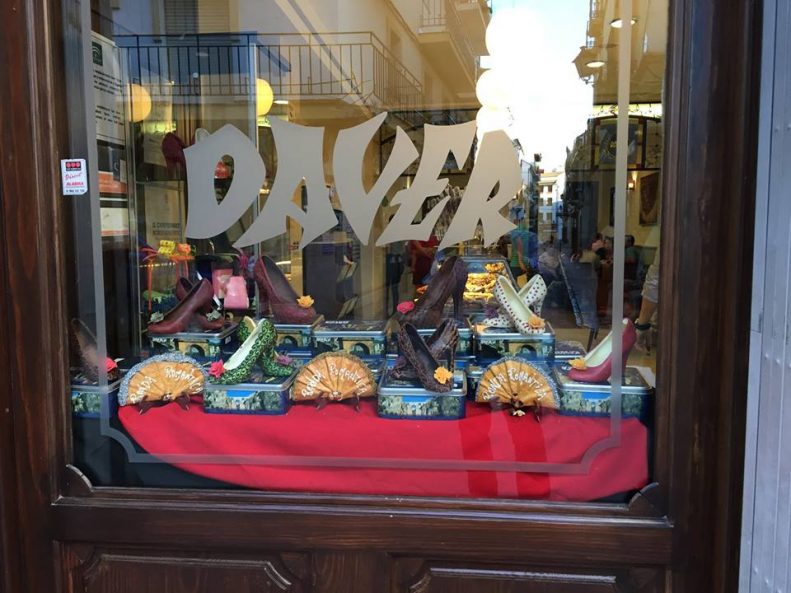 I found a wonderful cake shop here called Daver. On Calle Virgen de la Remedios this pasteleria also has an online store) They have been in business since 1942 and are a firm favourite with the local Rondeños.

They do ice cream and these adorable chocolate shoes too!

Stopping off for coffee and a cake here was the perfect pitstop after all that walking.

Ronda´s bull ring is one of oldest in Spain. Built in 1785 in the newer part of the city.

(the oldest one in Spain from 1711 is Bejar, in Salamanca)

This monumental building is worth a visit even if you are not a great fan of bull fighting. This Plaza de Toros has a museum with Horse harnesses and saddles used by Royalty. Other areas of the museum have antique firearms and exhibits related to bullfighting.

It has been said that the construction of the inside of the bullring reminds people of the Carlos V palace of Granada´s Alhambra. If you visit Rondas Bullring you get to see the seating area, the ring itself, the paddocks and even the bull pens.

After visiting the Bullring and the Alameda park and gardens, which is the most visited area of Ronda. I walked across the bridge taking in the views on either side. This main road leads into the older district of Ronda.

Following the main street I soon come to a pretty square off a small street to the right. On each side of the square there are important buildings. The Plaza Duquesa de Parcent. The square holds a military building, the town hall, a shady inner square with a fountain and two churches too. This church in the photo is the  Santa María la Mayor de Ronda, built in the 15th century.

Despite the allure of the quaint square, the highlight for me in the older part of Ronda is the Minaret. The Alminar of San Sebastian dates back to the 14th century. In the 11th-14th centuries Ronda had 21 mosques for the ever growing population.

This is the only building left from that time. Ronda was conquered in 1485, ending Muslim rule. Used as a belltower for the San Sebastian church in the 17th century it is now unused. Yet it still conserves its original architecture from the 14th century.

The 13th century Arab baths is right at the bottom of the town. Although they were slightly damaged in the Winter floods of 2018 when I visited in Summer 2019 they were perfectly restored.

Divided into the Cold Room, Warm, Hot bath and entrance hall. On the outside of the building you can still see the water mill and a large water tank where water would be stored and collected.

Opens daily at 10am

Probably the most surprising place I visited in Ronda was the Casa del Rey Moro. An 18th century house with a surprise within it´s stunning gardens. Although the garden is worth visiting itself for the pretty views of the gorge and formal planting.

The property is home to a water mine.

Descending 192 steps within the rock, this engineering marvel was built in the 15th century to guarantee the water supply at the time of the Christian-Muslim wars. Undiscovered for 400 years you can now visit this magical place.

As you wander down through the old town you see the Minaret, the square next to the Iglesia de Santa María la Mayor but you also come across this gothic church. Spirito Santo.

Built in the 15th Century on the site of an old Mosque. This was opened by the Catholic Kings, Isabella + Ferdinand.

This church is also next door to a Spanish School, entrelenguas which is where I was heading that morning.

Daytrip from Malaga Granada or Seville

Take a daytrip from Malaga, Granada or Seville to Ronda. This way you can skip the driving yourself and not worry about where to park in the historic town.

I spent 2 days at Entrelenguas. A great space to learn Spanish. I wanted to experience the language school for myself. They have a cultural  immersion programme which is ideal in Ronda. There are plenty of places to visit on the weekends yet you aren´t distracted during the week at this quiet inland setting.

Not only can you learn Spanish in the classroom at Entrelenguas you can also stay with a host family for language immersion too.

They offer cultural experiences such as day trips, tapas evenings and visits to local wineries.

I enjoyed a tapas evening with a group in the new town and a guided historic walk around Ronda.

With students from different countries across the world. It´s a friendly welcoming environment. In January I met people from South America, North America, Czech Republic and even South Korea.

There was also a mix of language levels and ages.

On of the Entrelenguas activities we visited the Palacio de Salvatierra. This stunning property is beautiful inside and out. In 1994 it used to film Madonna´s Take a Bow video. (the Bullring wasn´t available for the filming) Built in the 16th century and updated in the 18th century, the building is on several different levels.

Inside this palatial home the andalusian ceramic tiles and antiques are quite impressive. Makes me imagine living there, such a sumptuous home.

The Palacio de Salvatierra has a reading room looking out over the gorge with large windows.

But perhaps the most stunning part of the building is it´s magnificient garden with views to the Puente Nuevo bridge.

This building at the moment isn´t open for public visits. Local authorities are working on this and hope to open soon. (I will update the information)

Outside the garden has plants, steps to the lower level balcony and this nook for whiling away hot summer days.

Another fabulous palace that is worth visiting for its gardens and interiors. Built in the 14th century it is the Municipal Museum of Ronda.

Located inside the Palacio de Mondragon on the Cuesta de Santo Domingo. This is the most important building in Ronda, once belonging toy Abbel Malik (late 1400s) son of the last Sultan  of the Kingdom of Granada Abul Asan.

Over the centuries, with different periods of Muslim architecture and the Renaissance influence. This building has a rich tapestry of columns, inlaid wooden ceilings and stunning ceramics.

One of the things that I always remember from Ronda are the sunsets. This one was in January, a winter sunset. The corals and purples are always stunning to see across the Malaga countryside.