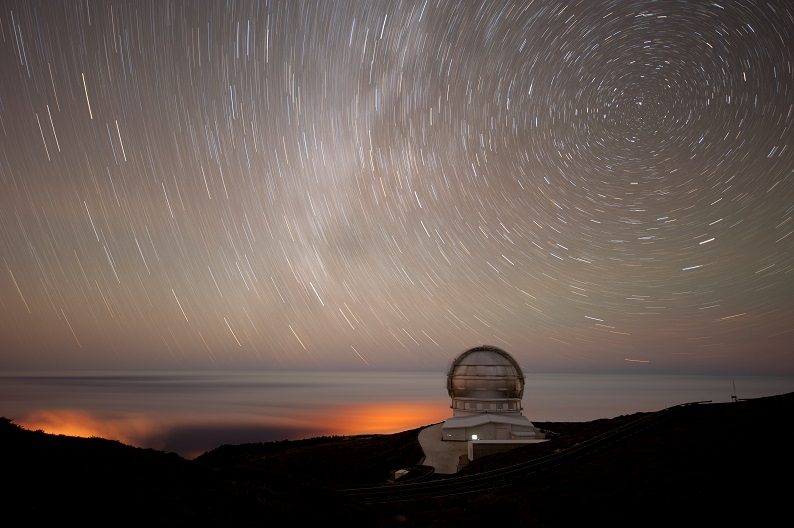 Inlcluding a variety of diverse  activities centred on the island’s starry skies.

Known as ‘la isla bonita’ (the pretty island), La Palma is internationally recognised by UNESCO as an official Starlight Reserve for the countless stars which can be observed and the island’s commitment to its environmental preservation.

Balcony of the Stars

Often referred to as the ‘Balcony to the Stars’, it is one of the three best observatories on earth, and home to the largest optical telescope in the world.
Astro Fest La Palma, kicks off on Thursday April 5th with the Carrera de las Estrellas (Star Race).

It is the first ever competition to be certified as a Starlight Sports Event.

A 2.4km uphill race to the islands stars, the race begins at night in Hermitage Pino of the Virgen and along the forest track of La Hilera.

Lit up the way by the starry skies. Another sporting event takes place on 12 th May. A reinvention of the world renowned Transvulcania trail runs. Known as Transvulcania “Space Runners” 2018, the race climbs to the Roque de Los Muchachos Observatory; the highest point on the island.

The race is one of toughest in the world, with a distance of 74.33 kilometres through volcanic terrain.

From the 15th to the 21st May, the Vi Astromaster La Palma takes place, giving the opportunity to join world-leading astrophotographer Babak Tafreshi for a 7-day intensive workshop focusing on Advanced Timelapse imaging, processing & landscape astrophotography.

The program includes tours to astrological viewing points on La Palma. One has a visit to the European Northern Observatory too. Another popular event is the 12th edition of the Little Festival of Stars held from 19th until the 27th May.

Based in Los Llanos de Aridane until the 23rd and then finishing off in the capital, Santa Cruz de La Palma, activities are focused on creativity, consciousness and
nature.

During this week, visitors will be able to take part in film shootings, music concerts, poetry sessions and astrology workshops, all underneath the starry night sky.

La Palma’s homage to astronomy provides activities day and night. Some are exciting, but also educational for all ages. Conferences on “Preserving The Skies” on the 20th April and the Night Landscape Conference on 23rd May.

The AstroFest La Palma is one of the highlights of the year on the island, mixing astronomy with sports, education, investment, music, culture and much more.